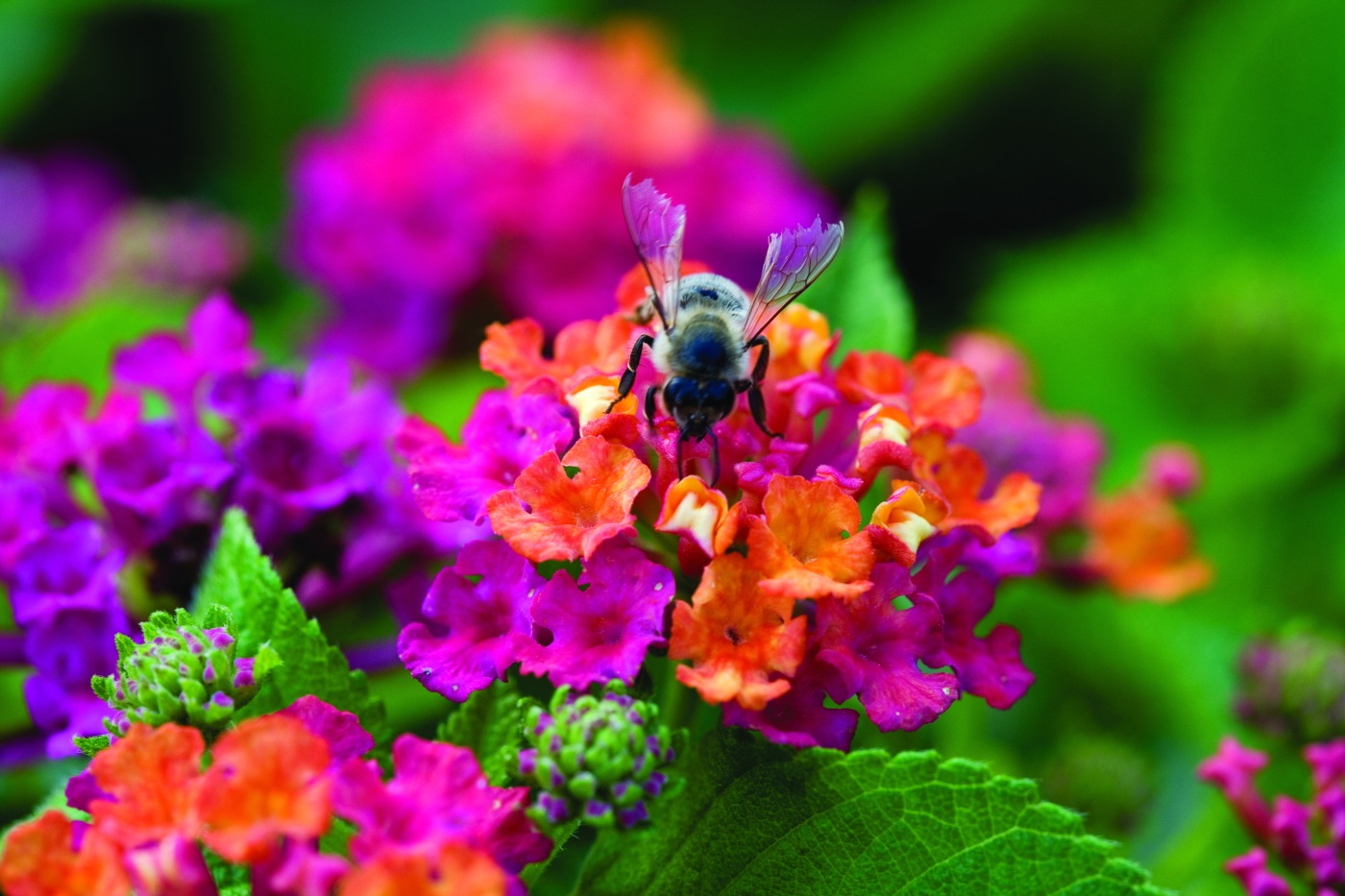 This year the National Garden Bureau  features Lantana as its annual flower of the year.  In the 18th century,  lantana was a popular greenhouse plant in Europe and breeding efforts were extensive, resulting in hundreds of available selections. The most commonly available species, Lantana camara, is a tender plant winter hardy to zone 8. Although lantana is not winterhardy in Nebraska, it makes a tough, colorful summer annual for containers or ground beds.

Butterfly Magnet
One of lantana’s best features is bees, hummingbirds and butterflies are all very attracted to its bold, colorful flowers and their sweet nectar. The flat-topped “landing pad” flowers consist of clusters of tubular blooms that together make an umbel flower form.

Lantana flowers come in single or multiple colors. Multiple colored lantana flowers change color as they mature. The newest flowers, opening in the center of the umbel, are one color that changes as they mature and move to the outer edges of the cluster. This maturation of the flowers within the umbel can lead to two or even three-toned flowers. The flowers come primarily in shades of red, orange, yellow, white, pink, purple or lavender and often have a slight, spicy flower fragrance. Plants begin blooming in early summer and continue until killed by frost.

The easy-to-grow and tough nature of lantana makes is a great plant for beginning gardeners. Plants do best in a full sun locations with well-drained soil. Once established, plants perform well under hot, dry conditions so be sure not to overwater them. Since lantana comes from the tropics and prefers warm temps, plant it outside in Nebraska after danger of frost has passed.

Lantana have very few insect or disease problems, plus deer and rabbits don’t like them much so wildlife damage is rare.

Lantana hybrids fall roughly into two forms: compact or trailing. Compact, mounding plants are readily available and perfect for small spaces and containers. Trailing forms, which can spread up to three feet, are ideal to economically fill in larger areas with an impressive display of color. When purchasing your Lantana, always consider the final plant size as some can get quite large.

When creating a container grouping, choose companion plants that also prefer the full sun, dry conditions loved by lantana. Pair them in containers with upright plants such as Canna, Corydalis, Dracena, grasses or millet. To fill out the bulk of the main container space use lantana and other mounding plants, such as Angelonia, Celosia, Cleome, Coleus – sun types, Gomphrena, Pelargonium, Petunia, or Zinnias. Finish up your container by adding in some trailing plants to drape down the sides – ornamental sweet potato vine, Bacopa, Callibrachoa, Dicondra or vinca vine, or a combination of a couple of these, would be great choices.

Varieties to Choose From
Breeders have recently introduced sterile, or near sterile, hybrids which means the plants never set seed triggering them to continue to bloom and bloom and bloom through the entire season! So, when that heat kicks up, these sterile varieties won’t set seed or cycle out of flower. New sterile varieties to look for include ‘Gold Mound’, Hot Blooded™, ‘New Gold’, ‘Alba’, Patriot™ Series, Sunburst™ Series, and the Bloomify™ Series.

There are several named lantana series available through garden centers or mail order nurseries. Plant series are groups of hybrids with the same or very similar growth habits (height and spread) and number of flowers, but different flower colors. Three great lantana series to look for this spring are listed below.

All images are from the National Garden Bureau.