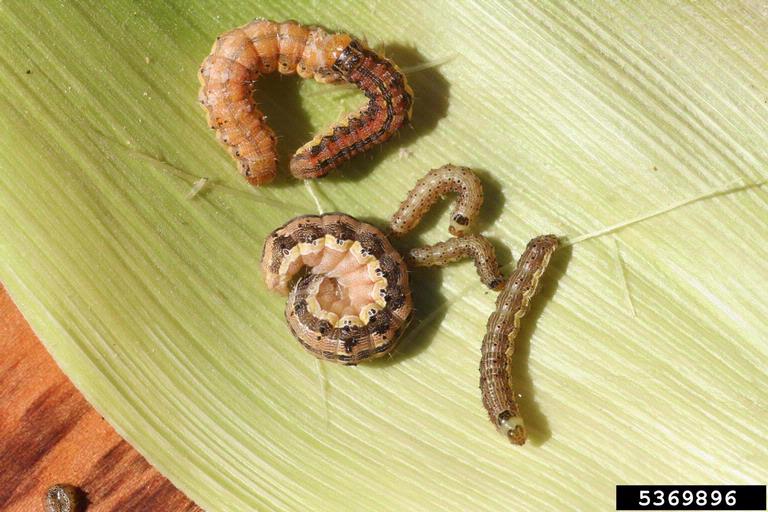 Sweet corn season is here, and there’s nothing like eating freshly harvested ears – unless you find a worm when peeling back the husks! That unwanted intruder is usually the corn earworm.

Identification
These caterpillars vary widely in color and may be green, brown, pink, black or various shades between these colors, with light and dark stripes along its sides and back. The head is always a yellow or light brown color, without any spots. Eventually they grown to about to 1.5 to 2 inches long.

The adult corn earworm is a grayish-brown, night-flying moth with a wingspan of about 1.5 inches. Female moths prefer to lay their eggs on fresh corn silks, but will also choose buds and growing tips of young corn if silks aren’t available. The tiny, light yellow eggs are laid singly. By the time the eggs hatch in a few days, they have turned to a dark brown.

The little caterpillars crawl down the silks to the tip of the ear to feed on the maturing corn kernels. Since they are cannibalistic – meaning they will eat each other and the strongest or largest caterpillar wins – you typically will only find one in each ear of corn.

Corn earworm, also know as the tomato fruitworm and cotton bollworm, has a wide range of plants it feeds on besides corn. Other vegetables it will consume include tomatoes, peppers, beans, cabbage, and soybeans. They prefer corn, but late in the season when corn kernels are maturing and not as attractive, they will damage tomatoes and snap beans by eating into the fruits or pods.

Control in the Home Garden
There are several options for controlling corn earworm in the home garden, but if you’d rather not use insecticides you can always just cut off the damaged parts of infested ears, as the portion not fed on by the caterpillar is still perfectly good.

Plant early. Sweet corn harvested before mid-August will have fewer, or no, earworms. Check the number of days from seed to harvest on the seed package and look for those that can be harvested in less than 70 days. Plant as early as soil temperatures are right for seed germination, typically 55°F for standard sweet corn and 65°F for supersweet cultivars.

Experiment with cultivars. Try using a variety of sweet corn cultivars and planting dates to find which combination gives the most control. Corn varieties with tight husks at the ear tips are naturally more resistant to earworms.

Use oil. If you only have a few corn plants, try using vegetable or corn oil for control. Even better, mix the oil with Bacillus thuringiensis var. kurstaki (BTk), sold as Dipel or Thuricide, or Neem. Mix 1 part Btk or Neem with 20 parts oil. Apply 5 drops of the mixture with an eyedropper to the tip of each ear. As the young worms travel from their hatching spot on the silk into the ear, they will suffocate as they move through the oil. Only one application is needed.

Insecticide applications. Chemical insecticides can also be used to protect the ears, but once the caterpillar has entered the ear, there is no effective control. To be effective, you need to completely cover the end of the ear and silks so when the eggs hatch, the young caterpillars will immediately contact a lethal dose of insecticide. Treatments must be reapplied every 3 to 4 days from when silks first appear until they become brown. Home gardeners can use carbaryl, permethrin, bifenthrin, cyfluthrin, cyhalothrin or Spinosad for earworm control.