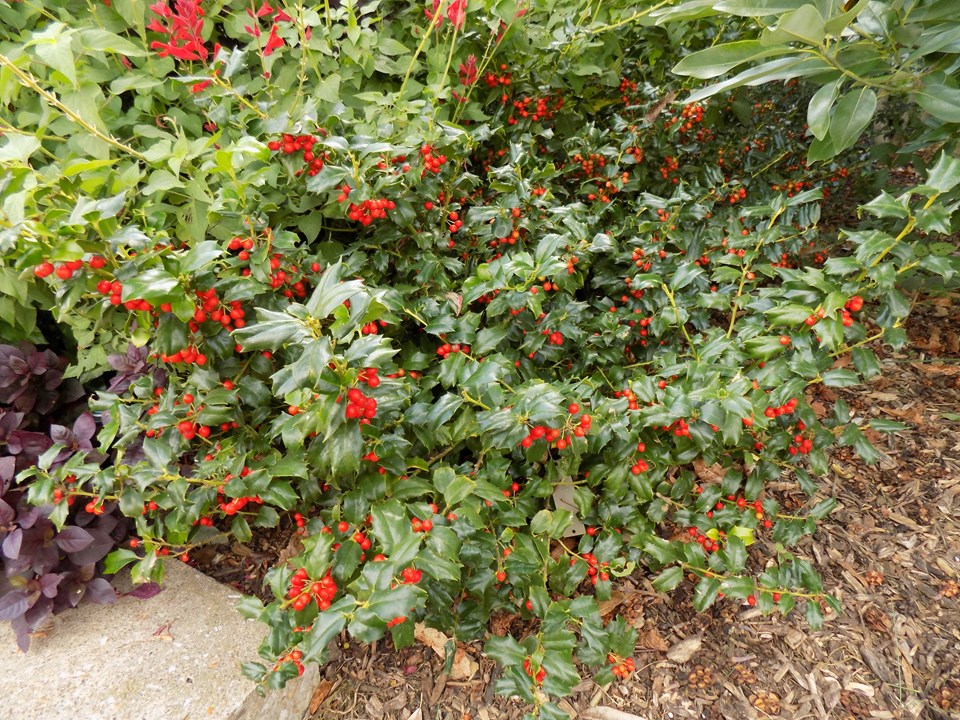 I’ve always envied southern gardeners, and their ability to grow big, beautiful American holly trees.  It would be so nice to simply walk to the backyard and snip a few branches with colorful berries for holiday wreaths or arrangements.  During the holiday season, English holly (I. aquifolium) is popular in wreaths and greens, but unfortunately it also is not winter hardy in Nebraska.  However, there are hollies we can grow including Meserve and winterberry holly.

Holly is in the Ilex genus, a large group containing over 400 species.  Plants are often evergreen, and usually grown as shrubs or trees.  Many species of holly are dioecious, meaning each plant produces only male or female flowers.  To produce colorful berries both plants are needed. Female plants will not produce berries without males to pollinate them, although one male plant can pollinate several female plants.

Meserve holly, Ilex x meserveae, is a group of hybrids originally developed in the early 1950s by Mrs. F. Leighton Meserve of St. James, New York.  She crossed cold hardy Prostrate holly, I. rugosa, and English holly, resulting in a wonderful group of plants with attractive evergreen foliage and increased cold tolerance.  Later breeding work did not always use the same parents, but the cultivars below are still considered Meserve hybrids.

Meserve holly foliage is leathery and dark green, with spines along the margins similar to English holly.  Plants are evergreen, holding their foliage throughout the year, growing best in well-drained soil with consistent moisture, and at least partial shade in summer. Best locations in the landscape for Meserve holly are the north, northeast or northwest side of your home where summer temperatures are cooler and some shade is available.

Winter desiccation is a problem for evergreen hollies when soil is dry or the ground is frozen, particularly if plants receive strong winter sun and wind.  Make sure plants are well watered throughout fall, so they are fully hydrated going into winter. The use of anti-desiccant spray can also help reduce winter moisture loss.

Meserve hollies are slow growing, and although they can reach 8-10 feet in height eventually, it will be many years before they do.

Winterberry, Ilex verticillata, is a deciduous shrub with medium to dark green foliage.  Fall leaf coloration is yellow, and as a deciduous plant, winterberry loses all it’s foliage in fall to reveal its most striking feature – beautiful red berries that really liven up the winter landscape!  Cut stems can be held indoors for several weeks, as long as they are dry and not in water. Plants are slow growing and easily pruned, but can get 6-10 feet or more in height.

Winterberry prefers full or partial sun, and moist soils with high organic matter. Its ability to thrive in wet soil makes it a good choice for areas that don’t drain well or where water stands for part of the year.  However, it will also grow in drier areas. Plants do well in light or heavy soil, but chlorosis can be a problem in high pH soil.  Winterberry is hardy to Zone 3.

Cultivars recommended for Nebraska include the following.

Next spring consider planting your own holly, and in a few years your holiday decorations could be “home grown.”