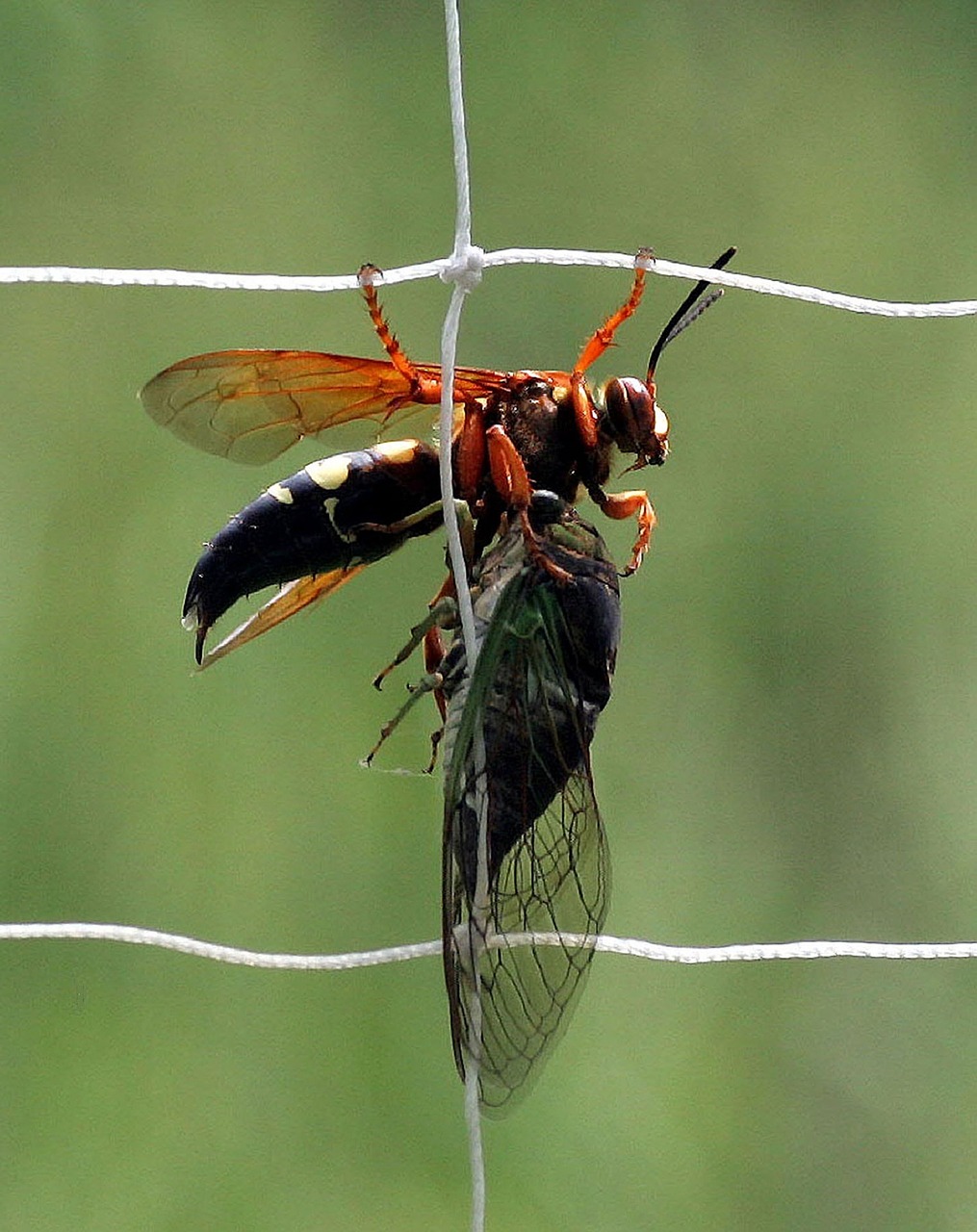 Midsummer is the season of solitary wasps. These wasps are called solitary because they do not build large colonies like paper wasps or yellow jackets. They are predators and prey on spiders, crickets, cicadas and other insects. Solitary wasps paralyze their prey and drag it to a burrow. They lay an egg on the paralyzed prey, which hatches into a larva that feeds on the paralyzed insect. Solitary warps are not aggressive and would only sting someone who is foolish enough to handle the live wasp.

While these insects are not a sting hazard, they do often frighten people. Males in particular can be territorial and fly towards your face to discourage you from coming close to their nests, but males lack a stinger so can’t sting. Females do have stingers, but prefer to avoid people.

In years with high numbers they may do some aesthetic damage to lawns as they dig their nests. Adult wasps may be found feeding on flower nectar. They do no damage to flowers, so can be ignored.

Three of the most common types of solitary wasps are the cicada killer wasp, steel blue cricket hunter and sand wasps.

Cicada killer wasps, pictured above, are the largest wasp species in Nebraska. They are up to two inches long and boldly marked with yellow stripes on a black body. Females are larger than males.

Cicada killer wasps create underground burrows. These burrows can be found near walks, driveways, and retaining walls and can usually be identified by the presence of fresh soil around the 1/2-inch entrance hole. These wasps can create clusters of nests within a preferred area.

makes sense that cicada killers are most abundant during midsummer when their prey – cicada, grasshoppers and crickets – are active. Each individual nest is provisioned with 2-3 cicadas for the developing wasp larva to feed on, then sealed. Larvae will develop in the soil until they emerge as adults next summer. This year’s adults will die off later this summer after the cicadas are gone. For more information, check out The Largest Wasp in Nebraska: Cicada Killer.

Not Asian Giant Hornets
Cicada killer wasps should not be confused with Asian giant hornets, which have not been found in Nebraska. Asian giant hornets have only been found within the United States in Washington state and the find did not locate an active nest. Murder and Mayhem: Are “Murder Hornets” Really on the Loose? (Answer: Nope).

Steel blue cricket hunter is also a large wasp, about 1 to 1 1/4 inch long. Sometimes called thread-waist wasps, this group of insects have a thin structure connecting their thorax and abdomen. Look closely at the steel blue cricket hunter and you’ll see their body is a dark steel blue metallic color with dark smoky wings. As their name implies, their larvae are fed primarily with crickets.

The sand wasp is around an inch long. They have large eyes, with black and white striped abdomens. Although they are considered a solitary wasp, several females may join together to create individual nests in the soil and discourage invaders. Backyard sandboxes are a prime nesting location for sand wasps. Their larvae are fed primarily with flies.

Control Is Usually Not Needed
Due to their docile nature and the fact they are beneficial predatory insects, solitary wasps should be tolerated as much as possible. They are active for only a short time in mid to late summer, then will be gone again for another year.

Ground nesting wasps prefer to dig in areas of dry soil. If their nest building is a problem in some areas of your landscape, one way to discourage them is to run a sprinkler where they are trying to nest. You may have to do this a couple times a day to keep the soil moist until they find another location.

If control is desired an application of carbaryl dust (Sevin) or cyfluthrin (Tempo) made directly into the burrow entrances is effective. If you’re nervous about approaching the nests, put the carbaryl dust on a shovel and sprinkle it over the holes.  Applications should be made at dusk, when the wasps are the least active.

Don’t broadcast applications of liquid insecticide over the area where solitary wasps are nesting. This method of application is unlikely to reduce their populations.